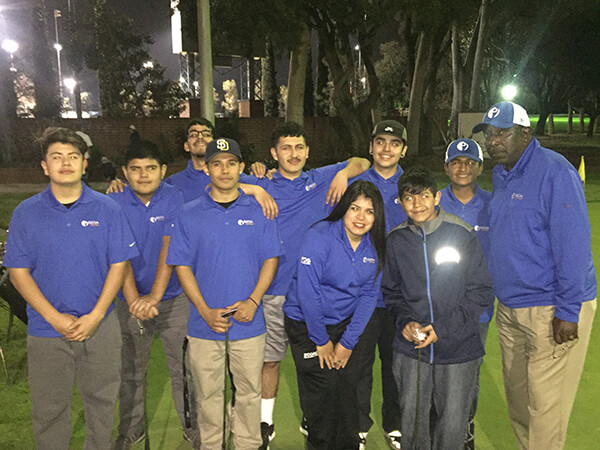 With a vastly under-resourced program and lack of connections with local courses, the Bell Gardens High School golf team spent the last several years practicing in a classroom, diminishing their ability to compete at the same level as other teams in the Almont League, and always leaving them unsure of the programs future.

After hearing about the struggles this team has faced, SCGA Junior Golf Instructor Desi Dominguez took it upon herself to reach out to the school and educate them on the golf instruction programs happening right down the road at Bell Gardens GC.

“It took a few months of speaking to different school administrators, but finally I got a hold of the athletic director,” said Dominguez. “He informed me that the team was without a coach at the time but would ensure the new coach reached out once they filled the spot.”

Luckily, the school quickly brought on Joe Jordan to coach the team. Jordan jumped in head first and has dedicated exceptional time to getting this program on track – including an immediate call to Dominguez to set up instruction for the team through SCGA Junior.

Jordan, an athlete himself, competed internationally in American football, and while he does not have a golf-specific background, he understands the importance and power sports can have on a teen’s development.

With this passion, he got the team out to the course every afternoon for 10 weeks, where the Bell Garden’s varsity golf team joined SCGA Junior’s daily instruction to prepare for competition in the Spring season.

“We set up a high school class for these boys, so they were not practicing solely with our younger players,” said Dominguez. “It was incredible to see how much they improved in this short time period.”

Following the conclusion of the boys 10-week cram session, Jordan took it upon himself to get each player enrolled in SCGA Junior, allowing all the players continued access to Bell Gardens GC and neighboring courses for both team and individual practice.

“This is a really special group of boys,” explained Dominguez. “A lot of them are exceptional students, pulling in grades above a 4.0 and are excited about their futures, they just needed some extra support.”

The impact of this program has been felt across the community, even with members of rival schools. Dominguez recalls an evening when she was packing up at Bell Gardens GC and was approached by a dad in the community.

“To my surprise, it wasn’t a Bell Gardens parent, but it was a dad whose son plays for Downey and just happened to see our instruction program,” recalled Dominguez. “He told me, ‘You are doing an amazing job, you don’t even realize what you did for these boys. I’m speechless.’ It was a powerful moment, it made me really realize the impact we were able to make on this team.”

Bell Gardens HS golf team is now competing in the Spring 2017 season and looks forward to a bright future partnering with SCGA Junior.