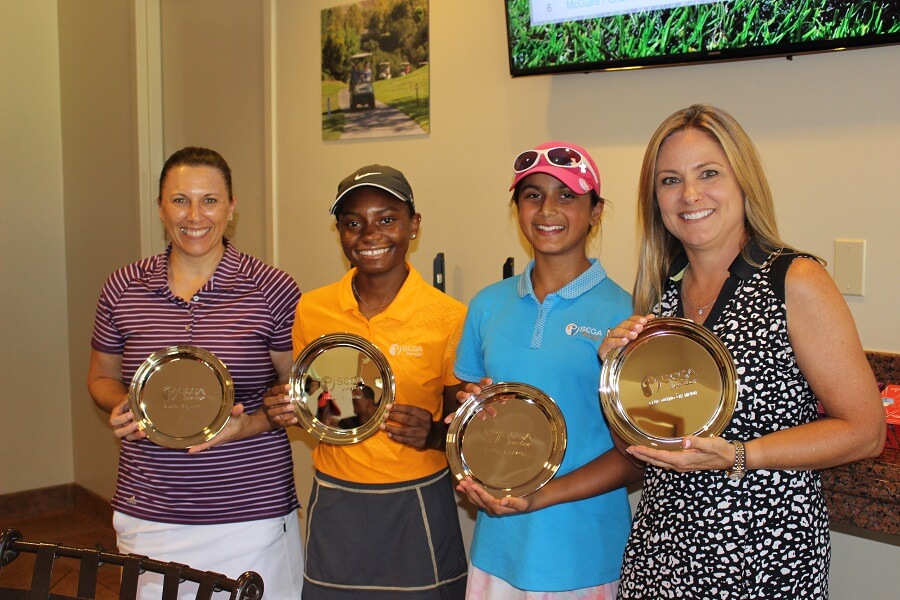 Connecting with fellow players, regardless of age, is one of golf’s great assets. Recently, a group of 12 SCGA Juniors were afforded the opportunity to meet and play with members at North Ranch CC during a Play Day. The North Ranch members mentored their Junior partners in groups of four, each with two juniors and two members, for a friendly competition round of nine holes.

Before the round, the juniors were also visited by Pepperdine head men’s golf coach, Michael Beard. Eyes around the room got wide as he mentioned some of the legends of the game who have also played the course they were about to embark upon — Tiger Woods, Dustin Johnson and Jon Daly.

Before making it to the professional ranks, Beard gave the group advice on how to catch collegiate coaches’ eyes on and off the course.

Though many of the juniors are still a few years away from applying to college, Beard also talked about how to impress a coach by having a good attitude.

“We want kids who want to have fun and love the game,” Beard said.

Fun was the theme of the day for both the members and the juniors, especially for the foursome of Jenny Duce, Dana Bryant, Melissa Kimball and Khivi Kaur who took home the top spot in the friendly tournament.

“It was really fun getting to know them and I really liked this course,” said Kaur who was participating in her second Play Day. “It was really open and really fun to play, and it was nice having someone to guide us through the course.”

For Duce, general manager of North Ranch CC, it was fun not only to play with the juniors but also have her club hosting the event.

“The highlight was getting to know these girls and what their aspirations are,” Duce said. “Our members take pride in having these, and its great to let them experience a different course that they maybe haven’t played before.”

For this group, connections and memories were made that will last far beyond the course.

SCGA Play Days bring active SCGA Junior participants to private clubs for the day to experience a special round of golf and mentoring with club members. These events are invite only, and are provided to kids who are actively engaged with the SCGA Junior Golf Club. Many of these juniors would not have the opportunity to experience a private club without the Play Day program.