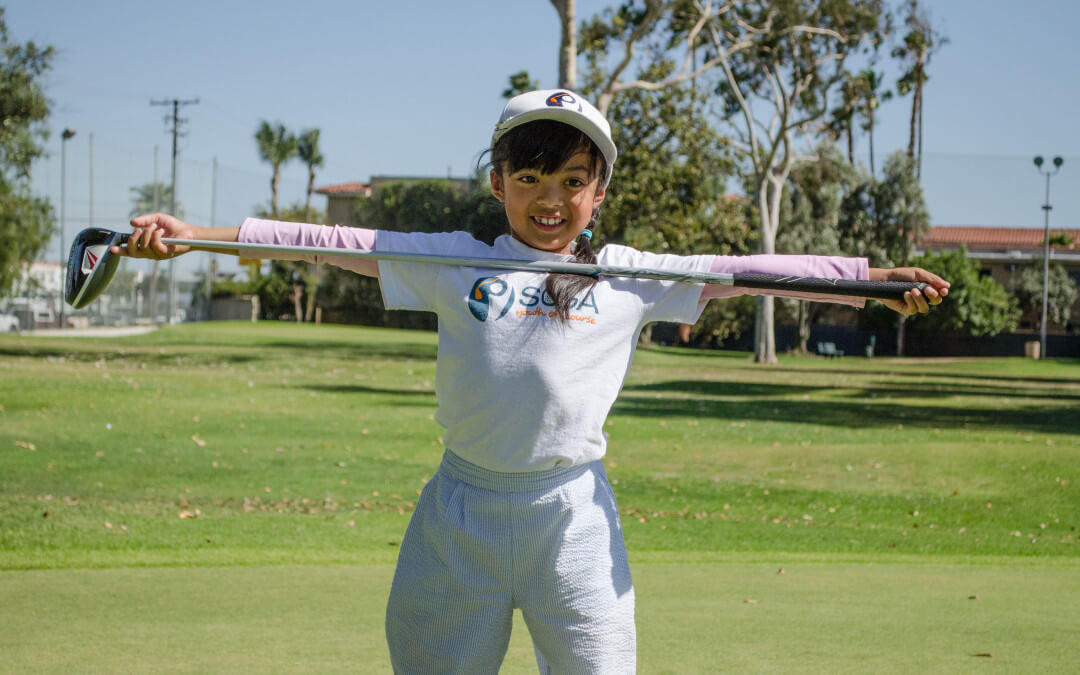 She’s barely taller than a full-sized driver and weighs less than your golf bag. Yet she’s driving the ball 130 yards and may
be one of the biggest golf nuts in Southern California. Watch out golfing world, here comes six-year- old Chloe Viray. In many ways, Chloe is your average first-grader. She possesses a bubbly personality, has bundles of energy and the confidence only someone who has yet to experience failure can have. “When I win my first LPGA event, I’m going to buy Hawaii,” she says, grinning, upon our first meeting. And yes, she means the entire state. And while it’s way too early to make any predictions on whether or not Chloe has what it takes to succeed at a professional level, she’s surely on the right track. “Chloe’s golf has gotten so much better in the past eight months, it’s unbelievable,” says her father, Wally. “She’s a better athlete. She’s stronger. She doesn’t get tired as easily as she did before.” The strength and conditioning factor that has been added to Chloe’s golf game is a result of the SCGA Junior Instructional Program at Norwalk Golf Center, a program that utilizes the Titleist Performance Institute junior golf curriculum. SCGA Junior  launched its presence in Norwalk nearly two years ago, giving juniors in the area the opportunity to advance
through a leveled golf program while simultaneously being put through a decision-making curriculum. Chloe’s numbers
prove the success of the program, as she has improved her nine-hole scoring average by 13 strokes in the past year. “The way this specific program is designed, they’ve made it enjoyable for kids,” Wally says. “As far as I’ve seen, it’s the best way to keep kids engaged in golf and maximize their potential.” Chloe would agree, chiming in with a quick, “I wish golf class was every day!” Golf class is not every day, but Chloe is at Norwalk Golf Center almost that often. She and her dad
practice outside of the SCGA Junior sessions frequently, with an ambitious routine of a nine-hole round, practice on the putting green and then the driving range. “Chloe is actually the one who pulled me back into golf,” says Wally, who was a junior golfer himself. “I had sort of stopped playing, but I went to the doctor one day who told me to go lose 30 pounds. Chloe was with me and told me to start walking the golf course. We’ve been playing together ever since.” With her increased love for the game, Chloe has begun playing in more and more junior golf tournaments, winning a handful
of them already. Her youthful naivety comes out once again when discussing the pressures of competition. “I don’t get nervous!” she says, excitedly. “Tournaments are really fun and I get to see my friends from golf class there also.” It’s no surprise that kids like Chloe have so much fun at golf class. The SCGA Junior program mixes in activities like jumping over hurdles, walking on a balance beam, tossing a ball and other non-golf activities to keep things fun and engaging. But all the skills help Chloe become a better golfer, making her stronger and more agile, skills critical to a golf game. “You look at the modern golf game, and it’s all about strength,” Wally says. “You have to be an athlete to be a golfer, and that’s what they are teaching these kids.” All kids involved with any of the three SCGA Junior  instruction programs (the other two are at Pico Rivera Golf Club and River Ridge Golf Club) also receive a SCGA Junior Golf
Pass, which provides $1-$5 green and range fees at a number of SoCal facilities, including Norwalk. “We’re so fortunate to be able to play as much as we want,” Wally says. “I have friends who can’t play year-round because of expenses,
and I know they would love to have their kids play more often. Chloe can play anytime, anywhere.” – Julia Pine (Originally seen in FORE Summer 2014)