LPGA Amateurs of the Foothills Gives Back to Girls Golf 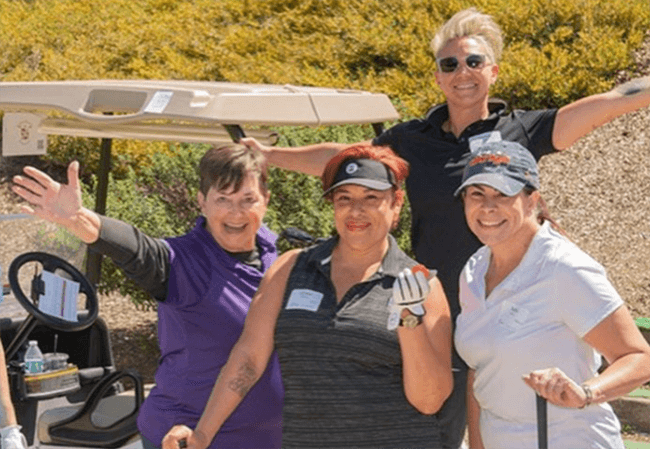 If you asked Lisa Kurstin two years ago how she spent her time, playing golf would have been her last answer. These days you’ll find her on the course at least five times a week.

Having only played the game rarely with her father and brother, Kurstin became more intrigued by the game during the early days of COVID and sought out more women to play with. By way of a simple Facebook search, she stumbled across Betty Anderson, a local LPGA teaching professional, and signed up for some lessons.

Quickly after joining the club, Kurstin volunteered to lead the chapter’s philanthropic efforts. The group spent several weeks discussing the most meaningful ways they could give back.

“It became clear in that discussion,” recalls Kurstin, “that it would make the most sense to find an organization that shares the values that we all have in the LPGA.”

Those values are twofold. The first is supporting other women, and the second is playing golf. It was then that the dots were connected to Girls Golf and SCGA Junior.

The relationship has since blossomed. SCGA Junior Girls Golf member Sophia Martinez attended the club’s most recent tournament at Chevy Chase CC and spoke about her experience in the program and the impact it has had on her life. The club also presented a check – a generous donation from the club that went directly to supporting the creation of a more inclusive and welcoming environment on the golf course.

“I don’t think there’s anything more fulfilling than being able to advocate for girls,” expressed Kurstin. “Golf hits all the marks. – it builds confidence, teaches discipline, offers camaraderie – it’s a gift to be able to give that.”

The SCGA Junior Golf Foundation is grateful for the support of SCGA clubs like LPGA Amateurs of the Foothills and looks forward to the continued partnership.

To learn more about how your club can support the future generation of golf, please visit scga.org/jgf.