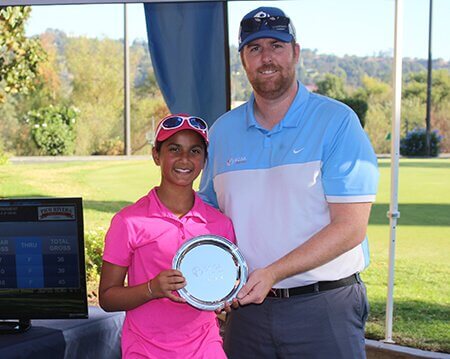 Riding on the success of the Learn to Compete instruction classes, a new opportunity has been created for our juniors to grow their games. Beginning in 2018, SCGA Junior will launch a tournament series focused on providing a platform for junior golfers to gain competitive experience and learn the rules and etiquette necessary to play in competitive tournaments.

Many participants of the SCGA Junior Instruction Program don’t have family members who play golf regularly, therefore have never learned the essential rules and etiquette to compete in legitimate junior golf programs that value competition. Through our instruction, however, these juniors are gaining the skills and technique to compete at a high level, so the goal is to provide knowledge and experience that will allow them to succeed in competitive golf.

“We’re excited to launch the tournament series to better serve our juniors in their development from beginner golfers to competitive play,” said Kaycee Wilke, SCGA Junior director of instruction. “We believe that the series will encourage and excite our juniors to practice and play more so they can eventually compete at the next level.”

The Learn to Compete Instruction Tournament Series will consist of eight tournaments, all of which count towards an end-of-the-year points system and championship. Juniors must be at least a Level 4 golfer in our nine-level golf system to participate in the tournaments.

On Oct. 7, a trial tournament was held at Pico Rivera GC. Nineteen juniors attended the inaugural event and it was evident from the beginning how excited the golfers and parents were for a competitive and affordable playing opportunity.

While some juniors viewed the opportunity as a way to compete against their friends, others like 10-year-old Chloe Viray used the tournament as preparation.

“I really like the Learn to Compete Tournaments,” said Chloe. “It’s really a great way for juniors to prepare themselves for High School Golf tournaments.”

Parents are also excited about the addition of an affordable, competitive tournament series.

“It helps us with the high cost of junior tournaments,” said Chloe’s father Wally. “Having these tournaments also gives the kids a goal to shoot for after all the practice.”