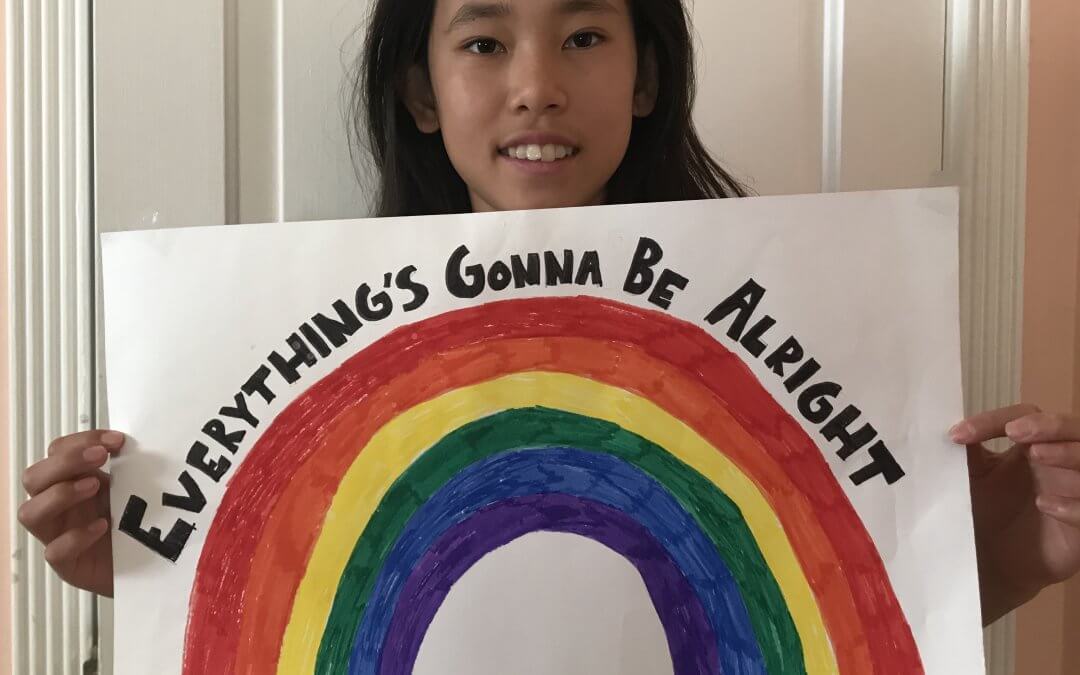 As the world is facing unprecedented times, one SCGA Junior member teamed up with her classmates to create a project that would help spread positivity and brighten the spirits of those around them. Sixth grader Ayuka Yang helped lead her class through the Rainbow Art Project and the project has been wildly successful at spreading cheer by creating homemade artwork with positive messages and colorful drawings.

Yang, an Advanced Player Program and LPGA-USGA Girls Golf member in the San Fernando Valley community, was approached by her teacher to co-lead the project with one of her classmates. The inspiration from the Rainbow Art Project comes from Italy, where children drew banners with their own inspirational messages in Italian. For Yang’s class, one of the main translations that they used was the phrase, “Everything’s gonna be alright,” based on the Bob Marley song.

The challenges of leading the project while attending school from home weren’t lost on Yang.

“My teachers chose us to be the leaders, and we made a recording and slideshow together through Zoom,” Yang said. “Even though we couldn’t be together at school, we worked through it, and when we had finished, we shared it with the rest of our school.”

Part of the instructions from Yang were: Sketch something, like a rainbow or a heart, and put lots of meaningful messages … hang it up somewhere where lots of people can see it like in a window, on your door or balcony … so that people can see it and smile while walking by.

Yang recruited her siblings to make posters alongside her and in total the class made more than 30 posters. The cheer has continued to spread as classmates have shared the project with their neighbors, friends and family.

“This project has meant a lot to me and my classmates because we knew we were doing something to help our world, even if it’s just LA or our neighborhoods, by cheering people up and letting them know that we will get through this tough time,” Yang said.

For Yang, the impact has spread far beyond her local neighborhood. She’s shared the project with extended family in Japan and Taiwan and they have also enjoyed the project.

“I am very proud to see my 12-year-old daughter, contribute to the community, especially during this difficult time,” said Yang’s mother, Yuria. “We hope this sense of generosity and importance of dedication to society will stay with her for the rest of her life and pave her life into something even bigger.”

So far, the importance of her work hasn’t been lost on Yang.

“This project has been the most important thing I’ve been doing during this time because everyone in the world is facing the same enemy, and we had to do something to help,” Yang said. “Our project has made people feel better about what’s happening and has let them know that everything will be alright.”

After all, that’s just what the poster says.