Golfing With the Gals 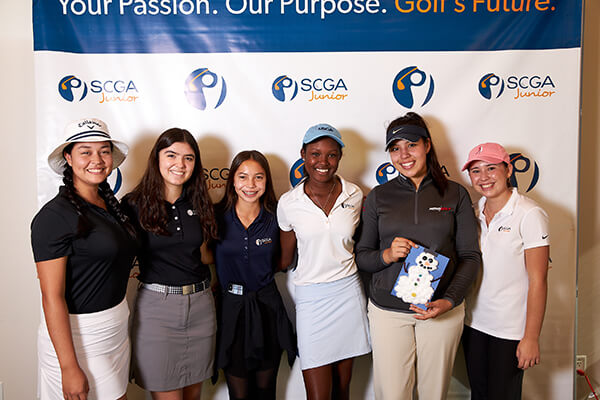 In a sport dominated by men, it can be hard for girls to find new opportunities to connect with other women in golf. For high school senior Deanna Roldan (pictured above, second from left), any chance to play with girls was a welcome one for someone who has spent four years of high school on the boys team.

“It was really empowering because I’m so used to playing with boys,” Deanna said. “My school doesn’t have a girls golf team so it was really different for me. It was really welcoming.”

Deanna participated in the summer high school girls class and not only improved her game, but also learned how to take on a leadership role and connect with other girls. The 4-week session was specially hosted for girls who play on their high school golf teams in the local Southeast LA community.

“I’ve seen Deanna transform from a girl who used to be shy to a leader,” said SCGA Junior instructor Desi Dominguez. “I’ve been close to Deanna since she first started golfing with us.”

The class was taught by two female instructors and two female coaches to help increase camaraderie among the women in the community and increase the level of comfort between participants and instructors.

Deanna said this was the first organized class that she’s been a part of that has been completely female.

“My high school golf coach was a man, so one thing I love about SCGA Junior is that I get to take class from other women,” Deanna said. “Coach Desi encouraged me and inspired me to keep going. She has a different approach to helping me with my game than my high school coach.”

There was a large focus on personal development off the course as well, including an emphasis on making new friends, meeting new female golfers and learning how to support women in golf on and off the course.

“Being on the boys team, I didn’t really get to meet a lot of other female golfers, so this was a great opportunity to meet girls from other schools,” Deanna said. “This is just a completely different atmosphere from anything I’m used to. There’s not that many of us girls out on the course, so when we are out there together it’s really powerful.”

Deanna has expanded her commitment to girls in golf by joining the LPGA-USGA Girls Golf of Southeast LA Leadership Team. The chapter was opened by SCGA Junior in December.

“I want to help other girls have a role model so they know that they can continue in the sport, too,” Deanna said. “I want to help these girls that are just like me. I just want to see more girls play golf.”