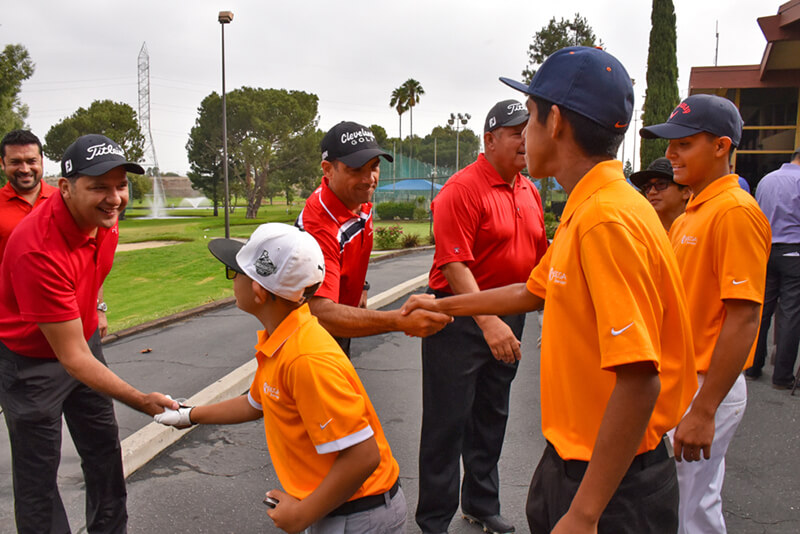 One day while practicing, SCGA Junior member Sal Hinojosa was closely watched by an influential member of his community – the Mayor of Pico Rivera.

After a minute of observation, Mayor David Armenta become enamored by 15-year-old Sal and his skills on the course, who was diligently practicing to better his stroke.

Armenta, feeling both excited and inspired, decided to challenge Sal to a match – specifically, the Inaugural Mayor’s Challenge, where he would bring three friends to tee up against Sal and three of his own buddies.

He approached Sal at Pico Rivera GC that day and proposed the match.

Sal jumped at the opportunity and gathered a group of kids who all take lessons and play alongside him at Pico Rivera GC, where he has been participating in the SCGA Junior program for four years.

“I felt excited and honored to play with the mayor of Pico Rivera. It’s a once in a lifetime opportunity,” said Sal. “I was really looking forward to having fun and showing off my talent on the golf course.”

Mayor Armenta and three of his adult friends faced off against Sal and his team – Joseph “JoJo” Gutierrez, 8, Nathan Sanchez, 17, and Andy Garcia, 13 – in a four-man best-ball match at Pico Rivera GC on a hot Friday in early August.

The match went off without a hitch. All eight participants went out on the course for some friendly competition over 18 holes.

Best of all, the junior team won!

“The best part of the match was beating the Mayor’s team!” exclaimed an excited Sal.

The sentiments were echoed from the participants’ parents. “We were very proud to have our son invited to participate in this event,” said Raul Hinojosa, Sal’s father. “Sal is a great kid who is respectful, caring, funny and has an innate passion for golf. And it was great to see the junior team was able to beat the adults! Our favorite moment was the tallying of the final score.”

Everyone had a great time, both on and off the course, and ended the afternoon with some fun games and eats at the local Shakey’s Pizza.

Sal notes that the Mayor’s Challenge is one of the many awesome opportunities SCGA Junior has provided him.

“I’m very appreciative of the SCGA Junior program,” said Sal. “I have had opportunities to play courses like Wilshire CC and Bel Air CC. I’m also grateful for the outings where I have met golf legends and role models. I look up to my coaches and really take their advice into consideration.”

Sal’s parents are thrilled with what the game has given back to their son over the past 11 years.

SCGA Junior is so thankful for the City of Pico Rivera’s support of our junior golfers. We can’t wait to see if the Mayor is up for a 2nd Annual Mayor’s Challenge next summer. Mayor Armenta, you better get in plenty of practice!

Check out a video of the Mayor’s Challenge!