An Afternoon With World No. 1 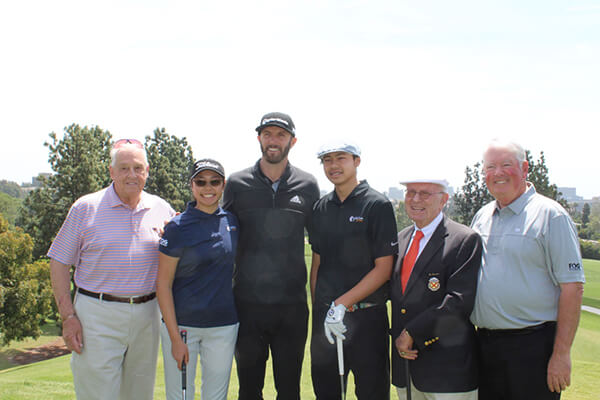 It’s the opportunity of a lifetime. Meet the person in the world who’s best at what you want to do with your life.

For Jasmine and Diamond Lew, two teenagers from SCGA Junior, they received that opportunity last week, when the two aspiring professional golfers spent time with Dustin Johnson, the No. 1 golfer in the world.

“It was phenomenal!,” said Diamond, 17. “To get to see him swing up close, learn about his swing mentality, ask him questions, it really was a once-in-a-lifetime opportunity.”

The siblings received the chance to spend time with U.S. Champ Dustin Johnson at the Friends of Golf Annual Golf Tournament, a world-class fundraising event that highlights FOG’s yearly activities. With more than 280 golfers participating in the tournament, which also includes a clinic, auction and fireside chat with Johnson, this year’s guest of honor, the organization was able to raise a record amount, all of which goes to supporting junior and collegiate golf. FOG, a prominent SCGA Junior donor and sponsor of the Instruction Program, has a passion for connecting their donors to the junior golfers who benefit from the funds raised, and each year invite two SCGA Junior participants to be involved in the clinic portion of the event. 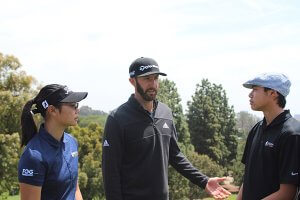 “FOG, along with the SCGA Junior, select a local high school boy and girl who have demonstrated significant talent and a serious ambition in competitive golf, but may not have had the financial resources to participate at the high school level,” said tournament organizers. “Through the contributions of FOG, the sponsors and the players, these two young people are on scene to represent all the high school boys and girls, in similar situations, throughout Southern California.”

Friends of Golf has involved SCGA Junior in the clinic portion of the event for the past five years, where juniors have had the opportunity to have their swings diagnosed by special guests such as Phil Mickelson, Luke Donald, Butch Harmon, Bryson DeChambeau and SCGA Hall of Famer John Cook. This year, that special guest just happened to be the world’s top golfer. This year, the two juniors were selected because of their unique involvement with Bel-Air CC, where the event is held, and FOG Founder Eddie Merrins. As can be read in this Spring FORE story, the Lews were selected earlier this year as the first particiapants in the Merrins Legacy Program, a program developed in conjunction with legendary golf instructor and SCGA Hall of Famer Merrins to help young, talented golfer prepare themselves for the next level of the game.

Diamond and Jasmine have been taking weekly lessons with Merrins for months, and their close relationship with the Southern California golf legend was apparent at the clinic. To kick things off, the two teen golfers took shots in front of a gallery of nearly 200, battling nerves to impress the large crowd. Next up was Johnson, who started modestly with a 9-iron before tournament organizers asked him to pick up the driver. What occurred next was a number of 330-yard bombs.

“It was so cool to watch,” said Diamond. “And then after, to have the chance to talk with him one-on-one, that was amazing. He talked about just doing it, rather than trying to do it, when it comes to your swing. And I got to ask him about how to play smarter in tough situations. We thank SCGA Junior and FOG for all the support and love they’ve shown us. Without them, we never would have had such incredible experiences.”

Along with wowing the crowd at the clinic, Johnson was also on hand for photo opportunities throughout the day, and participated in a fireside chat with Jim Nantz after dinner, where the two legends discussed Johnson’s recent withdrawal from Augusta, his successful start to the season, as well as the upcoming birth of his second child, who is due right after the U.S. Open, where Johnson will aim to defend his title.