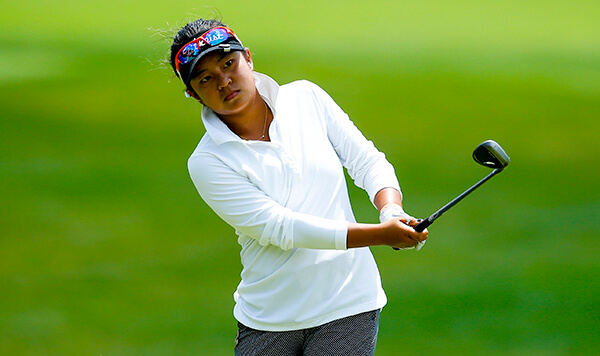 SCGA Junior donors were first introduced to Alyaa Abdulghany earlier this year, when she appeared in this article in the SCGA’s FORE magazine. The Corona del Mar High School junior had just won the girls’ individual state championship, elevating her presence in the Southern California junior golf scene to new heights, and using her SCGA Junior Golf Pass to do so.

And since then, Alyaa has continued to thrive. For the second-straight summer, Alyaa has spent most of her time on the road, traveling from tournament to tournament competing against some of the nation’s best amateur golfers.

“I added more tournaments to my summer schedule, and practiced harder to make sure I could go out there and perform at my best,” said Alyaa, who is currently No. 6 on the Junior Golf Scoreboard rankings.

Among the tournaments on Alyaa’s summer schedule were the U.S. Girls’ Junior Amateur and the U.S. Women’s Amateur, where despite making match play in both events Alyaa didn’t hit the goals she had set for herself.

“Those events didn’t turn out like I wanted,” said Alyaa. “But I got a really good experience out of it. Those two tournaments especially helped me understand my game a lot more. I can’t wait to play in them again next year.”

But for most 17 year olds, her performance in two of the biggest amateur events in the country would have been nothing short of impressive. In the Girls’ Junior, Alyaa finished stroke play T8, besting more than 100 talented golfers, and won her Round of 64 match easily before losing to girls golf sensation Lucy Li in a tough battle in the Round of 32. Then, less than two weeks later, Alyaa shot impressive rounds of 72 and 70 to make the match play field, won her Round of 64 match in 19 holes, and then lost an incredibly close Round of 32 matches in 19 holes.

But despite the rigorous schedule, life on the road is made easier by familiar faces.

“We’re rivals on the course, but we’re one big family out here,” said Alyaa about her fellow competitors.” “We take care of each other. Make sure we’re on time to our tee times. It’s really nice.”

Up next for Alyaa? Preparing for her senior year of high school before she heads off to USC for college next fall.

“I’m ready to get out of high school for sure,” said Alyaa. “But I’m also super nostalgic. I’ve played with all these people for four years now, and we’re really good friends. It’s hitting me hard.”