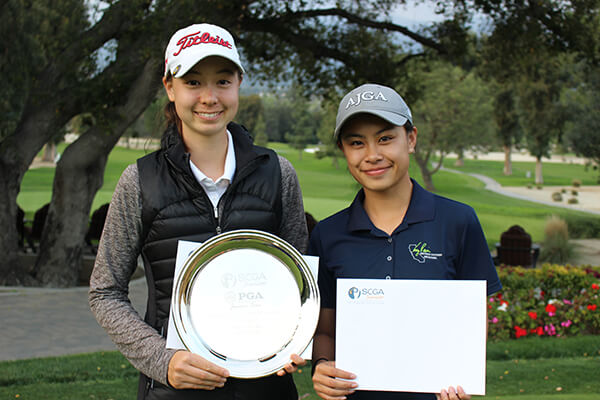 Playing alongside Hall of Famer Betsy King during the ANA Junior Inspiration in late March, Katherine Muzi soaked up all the knowledge she could.

On April 2, Muzi — a Walnut High School junior and future USC Trojan — applied the imparted wisdom to her game and earned a nearly-flawless victory in an inaugural event.

With just one bogey during her 18-hole round, Muzi fired a 1-under 71 and captured the SoCal Junior Girls Showcase title at Oakmont CC, subsequently earning one of two spots into the qualifier for the LPGA Hugel-JTBC LA Open.

“She taught me about encouragement,” Muzi recalled when discussing her interaction with LPGA legend King. “Getting to play with her really gave me confidence going into (the SoCal Junior Showcase).”

Essentially a qualifier for another qualifier, the showcase —created through a partnership between SCGA Junior and the Southern California PGA Junior Tour — invited 24 of the top players in SoCal (19 based on junior golf rankings and five at-large via application) to duke it out in a unique tournament.

“It’s going to be a really great opportunity to maybe play with some professionals who are trying to qualify for the LPGA,” Muzi said. “It should be fun out there.”

The second spot earned by a SoCal golfer in early April went to Abigail Wiranatha — Muzi’s high school teammate — who used an epic eagle hole-out to outlast Zoe Campos and Kornkamol Sukaree in a three-way playoff.

The trio finished 1-over 73 while battling for the second ticket. On the first playoff hole, from nearly 50 yards away, Wiranatha struck her ball in the middle of the fairway and watched as it bounced twice onto the green and rolled into the cup for a clutch, clinching shot.

Campos and Sukaree are both alternates for the Hugel-JTBC LA Open qualifier.

“I’ve made long putts in playoffs, but that one was definitely something special,” Wiranatha said. “I wasn’t expecting it to go in. But once it got on the line I was like, ‘Oh my gosh, that might go in.’ And when it did, I just had a moment.”

In front of a large gallery, comprised mostly of fellow competitors watching near the green of the No. 1 hole, Wiranatha’s eagle sent the crowd into a frenzy. Her excitement over the shot was nearly matched by the fact that she gets to move on with Muzi.

“It means a lot, especially since we’re teammates. It’s really cool that we both get to go the qualifier together,” Wiranatha said. “We’ll definitely have fun there and we’re just really excited.”

For a full photo album of the event, click here.