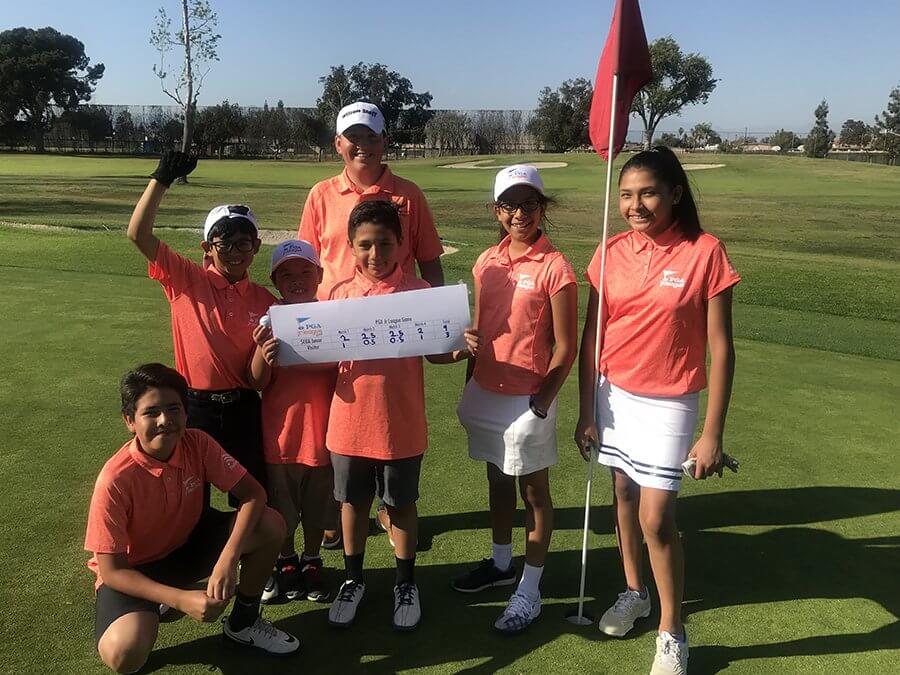 How did SCGA Junior manage to have two teams go undefeated in the PGA Junior League?

Simply by following the course, which always involves compassion, hard work and good times in a family environment. This was their first year involved in the PGA Junior League— a series of match-play team tournaments against other junior organizations in the area.

“PGA Junior League has been an awesome opportunity to watch our kids grow and take advantage of all the opportunities that we offer to practice and play,” said Kaycee Wilke, Director of Player & Youth Development. “From start to finish, our players became more knowledgeable about the rules of golf, practiced better etiquette each week, improved as golfers.”

Meeting for practice twice a week, the process followed what SCGA Junior is used to—working hard and having fun with our game improvement process.

“The coaches teach them values: respect, honor, dedication—it’s a very holistic approach, not just hitting a ball,” says Wally Viray, father of junior player, Chloe. “They make it fun. These coaches are like family to the kids.”

While the team aspect is new, they did not hesitate to embrace it. By using familiar instruction and technique, they incorporated their experience into an exciting team play strategy.

“You see them huddle together on the course, strategizing during the tournaments,” Viray said. “There’s no pressure on a single kid and they actually learn to be more aggressive by being in a team format.”

Joan Martinez’s daughter Sophia is naturally very shy when it comes to social situations which is how she gravitated towards golf at 5 years old, but being a part of a team helped change that.

“The social aspect with having teammates in the PGA League has allowed her to mature,” Martinez said. “I see evidence of this all the time. If I would have let her be, she would have played golf all day with her friends even after the event was over.”

With the Martinez’s, golf is a family affair. When Sophia isn’t dominating SCGA Junior tournaments, her and Joan spend a lot of time together on the golf course.

“Normally you see fathers and daughters playing together, so I think it’s nice that I can offer this to her and play with her regularly,” Martinez said.

Viray had a very different experience as a child, having strict private lessons and therefore didn’t like the game.

“If I wasn’t pressured to do it as a kid, I’d probably still play,” Viray said. “It all comes down to the fact that the coaches really care about the kids and they want them to flourish and be happy. If the kids are happy, they are not going to quit.”

Despite the two very different experiences, Martinez and Viray both find SCGA Junior’s approach beneficial for youth development not only in golf, but outside the game as well. Both want to continue golf through college. Who knows? Maybe we have future Scholars in our midst.