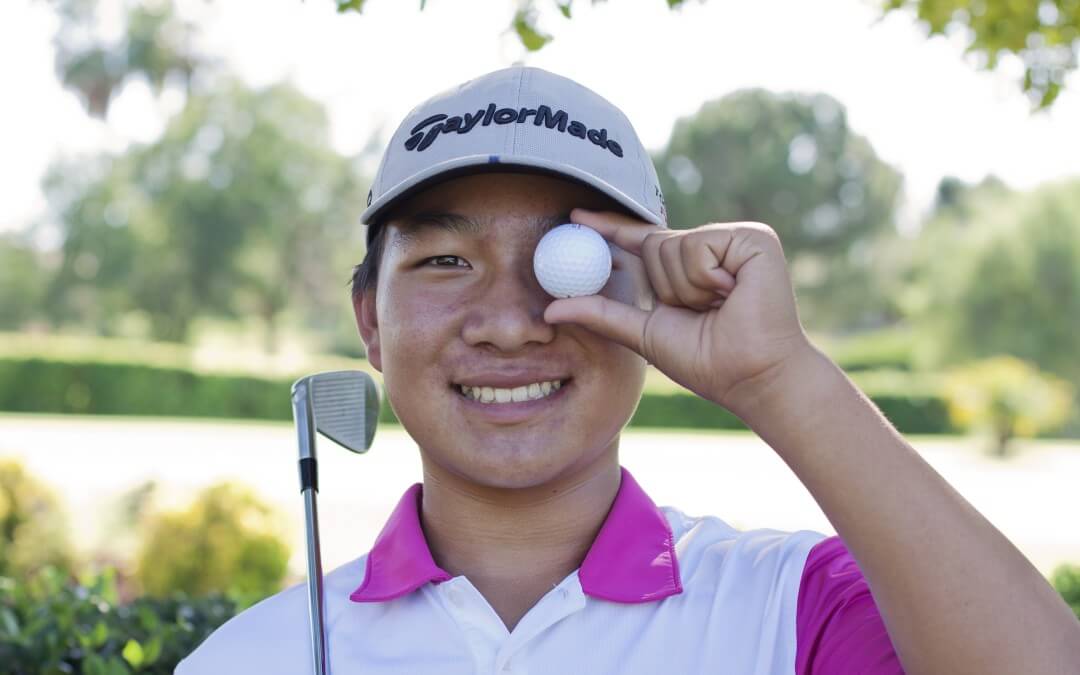 647. That’s the number of times 13-year- old Edwin Kuang has pulled out his SCGA Junior bag tag at a golf course and taken advantage of the opportunity to hit a bucket of balls or play a round of golf for $1-$5. “We really weren’t able to afford to fuel his love for golf before SCGA Junior,” said Edwin’s mother, Vikki. “We couldn’t afford to buy him a bucket of balls every day, so we allowed him a bucket every Saturday. He’d chip for a while first to make the most of it and then he’d go hit. Now with the SCGA Junior bag tag, he’s able to hit a bucket every day and he’s become such a better golfer. If
you need an example of practice paying off, he’s it.” An SCGA Junior Club Membership comes with the golf pass, which provides affordable access to more than 145 Southern California-area courses.
Edwin, whose family lives in Murrieta, plays the majority of his golf at Temeku Hills GC or The Golf Club at Rancho California. And the daily practice has paid dividends to his golf game, as the 8th grader is now averaging an 18-hole score of 73. “My game got so much better when I had the ability to practice more,” said Edwin. “My swing got more natural, the whole thing felt freer. I have friends who play golf who used to beat me every single time we played and now it’s the opposite. I definitely think I’m a little better than them.”
Edwin’s confidence isn’t off base either, as he beat out a lot of great golfers this summer to earn the first-ever SCGA Junior exemption into the SCGA Amateur Championship. Open to all SCGA Junior members, the competition included 18 holes of golf at Brookside GC. The low score would earn the final spot into the region’s most prestigious amateur event. “Playing against tough competitors, all older than me, in the Amateur, was a great experience,” said Edwin. “It boosted my confidence and proved to me that I could compete at that level.” With a field full of decorated amateur stars Edwin held his own at Rancho Santa Fe GC in July, making the 36-hole cut with opening day scores of 72 and 75. The Friday action was the first 36- hole day of Edwin’s life. “Oh my god. That was a really not fun experience,” said Edwin with a laugh.” After that first day I was just so tired I collapsed. I think I physically collapsed. And it made it difficult for days two and three.” Despite the exhaustion Edwin hung in there, finishing a respectable 43rd out of the 84-person field.
For Edwin now, it’s all about continuing to play against solid competition. He participates in the SCPGA’s Toyota Tour Cup, and is aiming to begin playing AJGA events in 2015. “I’m still in middle school so there isn’t really a golf option for me yet  in school,” said Edwin, who will join the Murrieta Valley High School team next fall. “But for now I just want to play as much as possible. Which I guess I am considering how much I’ve used the golf pass. I’m really thankful for it.” – Julia Pine (Originally seen in FORE FALL 2014)