Pebble With the Pros 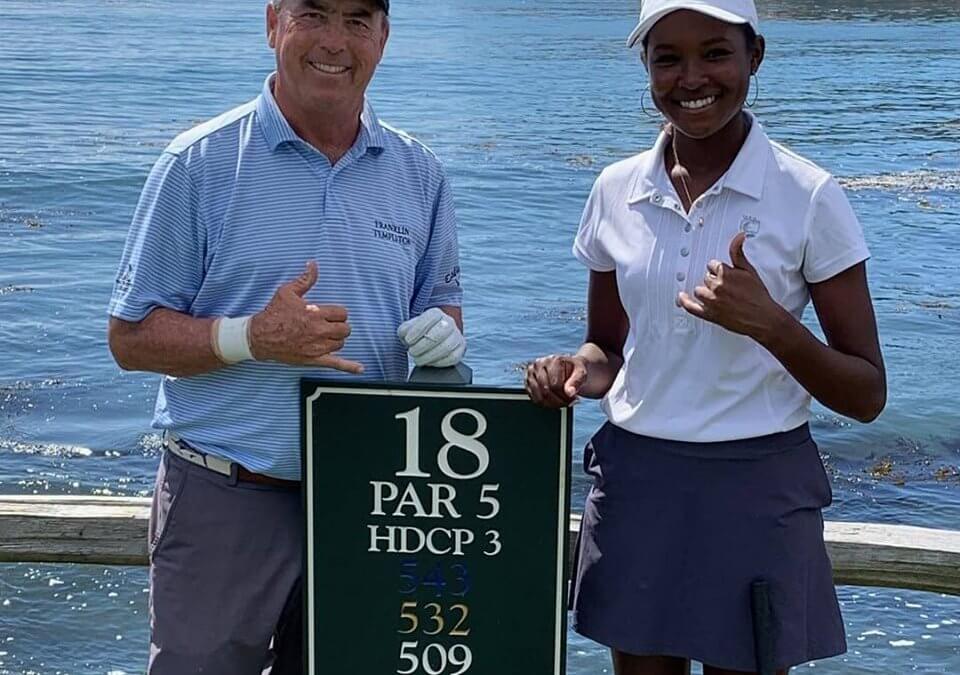 It’s not every day that as a high schooler you get to play Pebble Beach, let alone alongside professional golfers. But for Shani Waite, her first trip to the legendary course was as a participant in the PURE Insurance Championship.

The event pairs 78 PGA Tour Champions players alongside 78 junior golfers selected from The First Tee chapters around the country. Shani, who participates in The First Tee of Los Angeles in addition to SCGA Junior, was selected not only for her prowess on the course, but also for her personality and character off it.

“I felt proud and honored to be selected,” Shani said. “It gave me a chance to showcase my drive and skill set and support an organization that has given me so much and show why I spend so much time doing what I do.”

Shani, a senior at Mira Costa HS, was paired with Occidental College grad Olin Browne, for the week’s events and Shani said he couldn’t have been a better mentor. Not only did he help her on the range and work through swing issues that she’d be having, but he also took the time to talk with her about the mental game and taking golf and applying it to life.

“He told me to always take things easy and try not to overthink things,” Shani said. “Be confident with who you are because there’s going to be mistakes, but it’s how you react and come out of it that you learn from and makes you the person you are. Never be afraid to take risks.”

Shani’s week was filled with golf, inspirational moments and validation for her hard work over the years. She played three rounds at Pebble Beach GL and two at Poppy Hills GC. Browne invited Shani along to all his practice rounds and semi-competitive rounds where they were competing for lunch or a soda pop.

It was her first time playing golf on TV and she was alongside Browne for all his interviews – radio and TV. Even though she was nervous, she credited SCGA Junior with giving her the confidence to succeed.

“I’m so much more confident in talking and not afraid to speak up and be who I am because of having to talk to adults and talk in front of groups of people at Mentor Play Days,” Shani said.

An extremely involved member since she was a little girl, Shani has participated in many clinics, Mentor Play Days and now gives back by serving as a member of the Girls Golf of Southeast LA Leadership Team.

“Having your child be recognized not only as a golfer, but also as a person, means so much,” said her mom, Soroya. “Watching her be rewarded for being the person that she is and having fun doing it is incredible. Now she knows that her choices to be a good person makes a difference.”

Shani didn’t take a break when she got back though and dove right back into her normal routine with high school matches. Of course, she also uses her Golf Pass to get highly discounted rates at LA City and County courses, something she said has helped her game get to where it is today.