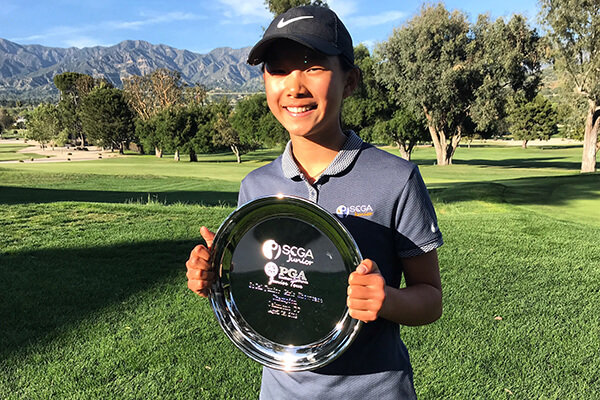 Despite being the youngest player in the field by two years, 13-year-old Leigh Chien took home the SoCal Girls Showcase title in commanding fashion at Oakmont CC. Chien didn’t card a single bogey during her round to finish five strokes ahead her closest competitor with a final score of -4. With her victory, Chien earned a spot in the Monday qualifier for the HUGEL-Air Premia LA Open, where she will compete against LPGA players for spots in the championship.

Chien offered a few insights into how she was able to play such an impressive round.

“I’ve been working a lot on putting and it really helped me today,” Chien said. “I didn’t have any three-putts and I made a lot of long putts so that helped me a lot.”

Long putt is a bit of an understatement. One of the highlights of Chien’s round came when she sunk a 50-foot putt to save par.

“I just read the putt like normal and made sure I lagged the putt to the hole instead of going too short,” Chien said.

Chien outran the pack including Amari Avery who finished in second at +1. Isabel Sy and Irene Kim tied for third just one stroke behind Avery and Zoe Campos rounded out the top 5 with a final score of +3.

“I’m so excited to play in the qualifier,” Chien said. “It’s going to be so amazing to play against such good players and it will be a great experience.”

The SoCal Girls Showcase is an invitational event featuring some of the top players in the region. Click here to view the full results.