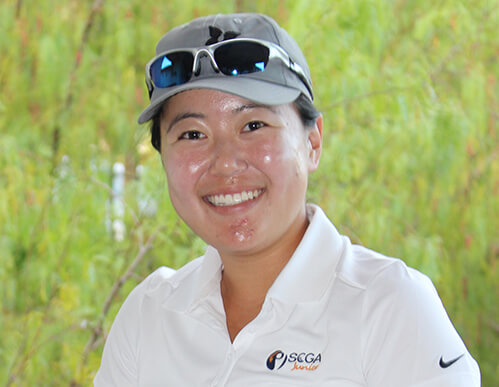 SCGA Junior Scholar Jamie Harada of Costa Mesa, Calif., placed second in this year’s L.A. City Women’s Championship at Rancho Park GC. With its highly competitive field, the tournament proved to be an impressive feat for the young player, proving college golf has really been a game changer for her.

Harada joined the SCGA Junior program at Costa Mesa GC in the 6th grade and attributes her love for the game and golfing success to the opportunities she was given as a junior golfer.

“I owe the SCGA a big thank you, without them I wouldn’t be the same person I am today,” said Harada. “It’s an honor to be a SCGA Junior scholar.”

The L.A. City Championship came at the end of a busy sophomore season for Harada, who plays for the Cal Poly San Luis Obispo’s Division I women’s golf team. She’s traveled all around the U.S., including a trip to the Big West Conference Finals in Hawaii.

“Getting to play in different states, I have started to learn a lot about playing in new conditions such as weather and varying types of grass. I had to play in hail in Arizona!” exclaimed Harada. “It’s just something I was not used to before, having played only in California.”

“College golf has allowed me to play at a higher level of competition,” she continued. “I love playing in high pressure situations. I am still learning to handle it and work with the pressure.”

After the team’s season wrapped up, Harada started preparing for the L.A. City Championship, starting with a practice round.

“I played Rancho with a friend and knew I needed to focus on putting for the tournament after being on the course. So my putting stroke was really all I practiced leading up to day one.”

Harada’s strong short game kept her in contention throughout the 54-hole tournament. One of the most notable moments from the tournament was her second round birdie-streak.

“I had seven birdies in one day, that is by far the most I have ever had in a single round,” said Harada. “The funny thing was, I had not been keeping track. It wasn’t until the round was complete that I realized I had accomplished a personal best.”

This was the first time Harada was in contention to win a tournament of this caliber moving into the final round of play.

“The night before I had butterflies in my stomach, I was definitely feeling the nerves a bit,” said Harada. “The biggest challenge I faced in this tournament was missing a first-place playoff by only 1 stroke, but the champion, Lydia Choi, really played an amazing final round. Coming in second drives me to work even harder to win next time and my coach [Tom Sargent of Mesa Verde] is great at encouraging me to use this near win as motivation.”

Harada has continued to have a strong summer with a third-place finish at the L.A. County Women’s Championship at Lakewood GC in late July.

Now, her focus is back on collegiate golf and team play.

“I am getting ready for the upcoming season, our first tournament is the first weekend of September,” said Harada. “I am just focused on qualifying and having a successful season.”

With a scoring average of 76 and three top 20 finishes as just a sophomore, Harada’s junior season is looking bright. Best of luck to this budding star!