Giving Back to the Game 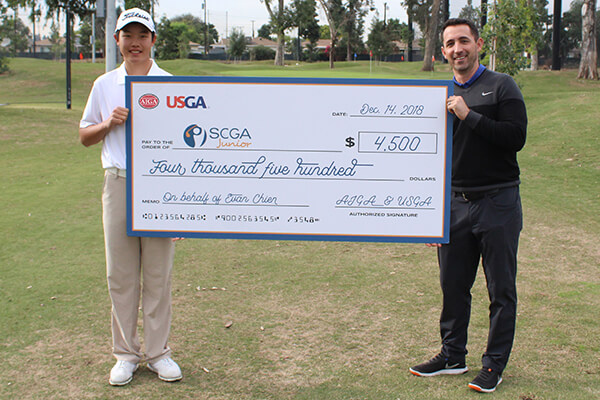 So often in the competitive circuits of youth golf the focus and pressure to be the best you can be on the course is crushing. However, for 15-year-old Evan Chien, he also has a passion for giving back to the game that he loves.

Evan is an SCGA Junior member who uses his Golf Pass several times a week and enjoys taking advantage of the off-course opportunities that SCGA Junior offers including the College Golf Summit and Rules Seminars, where he brags that he learned “cool rules tricks” that he was able to impress his friends with.

“Part of improving my game is playing lots of different courses, which can be really expensive so I use the Golf Pass to play more often and for less money,” Evan said. “SCGA Junior offers so much for me, so it has felt good to give back.”

Evan credits his father with initially pushing him to give back, but as Wayne Chien, Evan’s father says, as a parent you can only do so much. After participating in SCGA Junior’s Golf-A-Thon, Wayne said it helped his kids (Evan also has a sister, Leigh, who is a competitive golfer and Junior member) get their feet wet giving back and he encouraged them to take the next step.

“Having kids like Evan and Leigh be a part of our SCGA Junior family is what makes this organization so special,” said Executive Director Kevin Gigax. “The fact that Evan went out on our behalf and raised these funds just shows how much of an impact that golf can have in a kid’s life both on and off the course.”

Evan began in 2017, when he raised a total of $1,300 for Junior but Wayne encouraged him to outdo that in 2018. After reaching out to family, friends, business associates and working to get donation items from clubs for an auction, Evan raised $4,450 for SCGA Junior.

“I’m definitely very proud, but as a parent I can only guide my kids,” Wayne said. “Evan has continued to show leadership and come up with ways to raise more money year after year.”

He has so enjoyed giving back, that Evan is working on an even bigger fundraising plan for this year. Inspired by other AGJA State Cup events, Evan and Wayne are working to develop the California State Cup, which would be a Junior tournament on the AGJA circuit and raise even more money for SCGA Junior.

“There are so many golfers in Southern California looking for more tournaments to play in, and I thought it would be a cool idea to bring this tournament here,” Evan said. “SoCal golf is pretty competitive, so it would be fun to have a more relaxed tournament on the schedule, and get to play with your friends, while doing something good and giving back.”