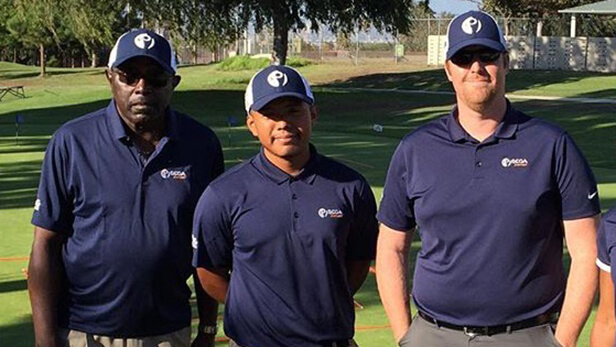 Trevor Banton, SCGA Junior’s newest coach in its instruction program, has been around the world and back again while soaking up experience and wisdom along the way.

Growing up in New York City, Banton was raised by his aunt and grandmother. He started working at age 12, delivering the Long Island Star Journal to the community of Corona in Queens, NY, and was pleasantly surprised with whom he would befriend through the job.

“Jazz stars Louis Armstrong and Dizzy Gillespie were on the route,” said Banton. “So, as you can imagine, that’s where I got most of my weekend tips. They couldn’t have been nicer.”

Also in the neighborhood was the group ‘Frankie Lymon and the Teenagers,’ who would occasionally invite Banton and his friends over to their place on the weekends. Banton would usually bring his next door neighbor, Mae Louise Allen, who went on to marry the ‘Say Hey Kid,’ baseball star Willie Mays.

When he wasn’t rubbing shoulders with celebrities, Banton was developing a passion for sports. Track and speed skating proved to be his forte.

“I was the first African-American to win the Golden Skates competition at Madison Square Garden,” said Banton. “I was also a decent track runner. In fact, I beat Bob Hayes in a 200M qualifier.”

Breaking down color barriers and smoking future Olympic champions was just the start.

Banton was heavily involved in the Civil Rights Movement and attended The March on Washington in 1963, an experience that changed his outlook on life.

“Those few days are what led me to enlist in our nation’s Army,” said Banton. “There was a sense of responsibility to be the best that I could be.”

While serving during the Vietnam War, Banton traveled the world, visiting places such as Turkey, Finland, Denmark and Germany.

“I was exposed to a vast amount of cultures and it was clearly beneficial,” said Banton. “I wouldn’t trade it for the world.”

After being discharged, Banton took a stab at Wall Street, working the trade floor in Manhattan before deciding it wasn’t for him.

“I just got tired of the rat race,” said Banton. “Getting on the subway every day is tiring. So one day I just said ‘I’m going to California.’ Been here ever since.”

Golf was a sport Banton used to overlook due to the lack of diversity. But a change in the game’s landscape is why he decided to join the SCGA Junior coaching ranks.

“Early on, the history of golf and segregation was a turn-off,” said Banton. “Now, I flip on the TV and I see not only African-Americans, but also people of all colors. And everyone is having fun.”

Enjoying life and making a positive impression is something that Banton was looking forward to in this new role as a coach.

“The best part will be the ability to reach out and make a difference in someone’s life,” said Banton. “You can reach out, but not everyone will grab your hand. But, if you play it by the numbers, even if you help just a few, you can make a difference.”

Trevor will be joining us as a certified coach at Bell Gardens GC, Norwalk GC and Pico Rivera GC. Golf has become his passion and he’s eager to teach and spread knowledge to SCGA Junior Instruction participants!