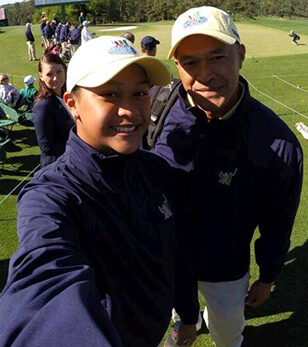 It’s a dream come true for one of SoCal’s own.

For thirteen year-old Kayla Sam, an SCGA Junior member, this week at Augusta National served as the culmination of hard work and dedication. The past three years Kayla has been trying to qualify for the Drive, Chip & Putt Championship, but 2016 was the first time she garnered an invite.

She took advantage of the opportunity afforded to her. Kayla took the 12-13 Girls division crown, also winning the long drive competition in the process.

“It was really cool,” said Kayla. “I didn’t expect to win. All the attention now has been a little overwhelming but I’ve been trying to enjoy it.”

Kayla was certainly a crowd favorite, as echoes of cheers could be heard throughout golf’s paradise.

“My parents said there was a big roar when I made my last putt,” said Kayla. “I didn’t hear it, but that’s pretty awesome.”

One would think that winning her division and being recognized as a champion would be the best moment of the week for Kayla. Think again, and remember that she’s a teenager.

“Justin Timberlake photo-bombed my picture with Justin Rose,” said a star-struck Kayla. “I found out when we got back to the hotel room and I looked at the picture. Never expected to meet people like that. It’s incredible.” Kayla was one of 80 participants who competed in Sunday’s Drive, Chip and Putt National Finals, which featured four age groups for boys and girls.