We are pleased to announce that the fourth annual COPi Cup Invitational Pro-Am presented by Legistics raised $100,000 for the SCGA Junior Scholarship Fund, bringing the four-year total of funding from this event to $254,000.

The COPi Cup was founded by Phil Frengs (pictured left) because of his love for the game and his passion to support the SCGA Junior scholarship fund, which he chairs.

The COPi Cup, played at Pebble Beach, promotes competition, camaraderie and charity. “We’re thrilled about the growth of the event and the wonderful generosity of our players in their support of the SCGA Junior Scholarship fund,” said Phil Frengs, SCGA Junior vice president. 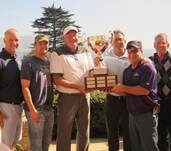 Since its 2013 inception, The COPi Cup has grown in field size and funds raised for the SCGA Junior Scholarship Fund and the named COPi Cup scholarship.  At this year’s event Phil delivered a convincing speech to support the scholarship program, which was followed by comments from 2015 COPi Cup scholar Alec Spencer, a University of La Verne college golfer. On-site scholarship pledges raised $35,000, and combined with pledges from COPi Cup alumni as well as other scholarship program supporters, donations totaled $42,000. As in previous years, Phil generously matched this amount.

For 2016, SCGA Junior will award $155,000 in scholarships, raising the eight-year total awarded to $600,000. These hard working students serve as role models within their community, and all have developed their character through the programs offered by SCGA Junior. With the help of fundraising events like The COPi Cup, the scholarship fund will continue to grow, providing more Southern California juniors with the chance to complete their college education.

Learn more about the SCGA Junior Scholarship Program here. We will host a renewing scholars reception April 30 at Friendly Hills CC and will celebrate our scholars at our annual Scholarship Dinner presented by Friends of Golf June 26.  Anthony Munoz, former USC Trojan and NFL Hall of Famer, will be our guest of honor.